Product - has been successfully added to your cart.
Checkout Now X

Developed in Switzerland a group of researchers from the Swiss Federal Institute of Technology in Lausanne (EPFL) had a goal to create an original pedagogical tool that could be used for a practical introduction of technology and robotics to children. In collaboration with the University of Art and Design Lausanne (ECAL), they developed Thymio II – a small programmable robot that could be used by teachers to introduce science and robotics.

“We worked really hard on the hardware”, said Francesco Mondada, Senior Scientist in EPFL’s Robotics Systems Laboratory who led the development. “Each sensor is associated with a coloured LED, which allows the kids to visualise the activation of the sensors during a specific maneuver.”

Thymio II has 39 LED used to visualize sensors and interaction. The robot also has a speaker meant for audio interaction. On its top, the robot has an indicator of its battery state, bumps used to hold LEGO, and 5 capacitive touch buttons with activity display and ON/OFF function. After turning on the Thymio II, users can set the robot to work in one of the pre-programmed modes which are distinguished by its behaviour and the colour robot emits when it is in a particular mode.

In friendly mode the robot emits green colour and it follows the object in front of it. Explorer mode (yellow colour) makes the robot explore the environment while avoiding obstacles. Red colour of the robot indicates it is in the fearful mode in which it detects shocks and free falls, and will show the direction of gravity. Signalised by cyan colour, the robot’s investigator mode enables it to follow a trail marked by a black colour marker. Thymio II in purple colour indicates it is ready to follow instructions in its obedient mode. When it is in obedient mode, it can be controlled by the buttons on by a remote controller since it has an infrared remote control receiver.

The programming is done by Aseba – a simple open source language with necessary basic concepts of programming developed at EPFL. Aseba is available for modification or downloading over the Internet.

Aside raising the appeal toward technology and robotics,  Thymio II can also be used to teach physics as a tool used to explain subjects such as gravity, the properties of light and temperature. 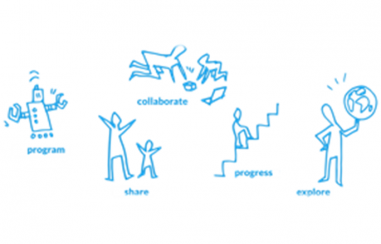 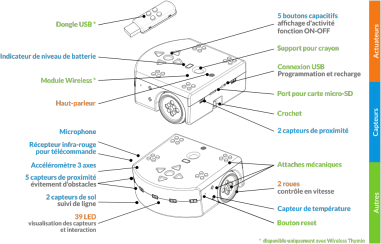